Justice Simon Byabakama, the Chairman of the Electoral Commission (E.C) has appealed to Ugandans to never again let the violent events that happened in Arua municipality on Monday reoccur.

On the last day of campaigns for the Arua Municipality Parliamentary election, chaos erupted in Arua after supporters of one of the candidates pelted stones at the convoy of President Yoweri Museveni who was driving through the town from an NRM rally.

The same evening, one person was shot and killed by what is believed to have been a stray bullet.

The E.C Chairman said that it is the responsibility of every Ugandan to contribute to the country’s democratic process which he said can not thrive where there is violence.

“We Ugandans are responsible for the development of our Democratic processes by expressing ourselves freely,” Justice Byabakama said on Wednesday prior to the announcement of the winner of the election.

“Therefore we should resist any conduct or action that infringes on the exercise of this right,” he added.

He said that elections are meant to be a free expression of one’s choice and a peaceful process. He advised the other candidates who lost in the race to be patient and wait for another round of elections come 2021.

“Let us make a firm resolution that never again should we have what happened in Arua municipality on Monday,” the Justice Byabakama urged.

“Let us convince one another not to do anything that foils our efforts to develop our democratic processes in this country”.

Wadri polled 6,421 votes ahead of his closest challenger, Nusura Tiperu of the ruling NRM who got 4,798 votes. The total valid votes cast were 16,476.

Byabakama thanked the people of Arua who turned up and voted despite the events of Monday, saying that it was a manifestation of resilience and determination. 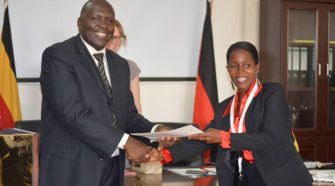