Government through the Ministry of Agriculture has donated 2,400 bags of irish potatoes to farmers in Rubanda district, as a relief intervention to farmers who lost their crops to the September, 2017 floods.

The potatoes were delivered on Friday at the Rubanda district headquarters by the State Minister for Agriculture, Christopher Kibanzanga.

Minister Kibanzanga asked Rubanda farmers to promote the growth of quality potatoes so as to meet the increasing demand of food globally.

“The demand for food currently is hitting USD 10 trillion and if we supported food production right from the grass root, Uganda could benefit greatly from this production,” said Kibanzanga.

The Minister promised to deal harshly with suppliers who engage in unclear deals while delivering government items to the farmers.

He also asked farmers to focus more on commercialized agriculture, as opposed to subsistence, in order to boost their income levels. He pledged continued government support to the farmers who prove to be development minded.

The Minister added; “Government after providing irrigation to farmers will ask you to leave wetlands and you utilise the water from wherever your gardens will be”.

“If you start farmer cooperatives, then expect serious government support. We need to have serious farming groups that are aiming at development,” he said.

Banyenzaki asked farmers to embrace locally available manure in order to avoid inorganic manure which is at times not good for their crops.

“If you applied animal dung to your gardens, it would do quite good work compared to the manure you buy that is processed,” he said.

Kenneth Jogo Biryabarema, the Rubanda district Chairperson decried the challenge of fake agricultural inputs on the market which has hampered productivity in the sector, and asked government to intervene.

“Our farmers have been for long struggling with poor quality manure and other agricultural inputs which have not yielded much to their expectation. We hope that government does something about it urgently,” he said.

Badru Sebyala, the Rubanda Resident District Commissioner asked farmers to always report any challenges they encounter to the relevant authorities for solutions. 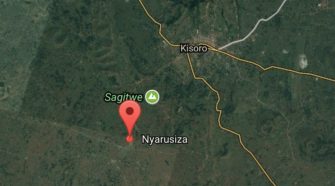