Government through the Ministry of Gender, Labor and Social Development is planning to roll out an apprenticeship scheme in order to bridge the skills gap and reduce the growing rates of youth unemployment.

The employment based scheme will target unemployed school drop outs, graduates and school leavers by giving them opportunities to acquire hands on skills so they can compete favorably in the labor market.

At an inter-sectoral consultative forum organized by the Ministry of Gender, Labor and Social Development on Thursday, Minister Janat Mukwaya said the apprenticeship scheme was critical at a time when majority of graduates that leave school every year can’t get employed.

Quoting statistics from the National Labor Force Survey in 2012, Mukwaya said that 95% of the youth in Uganda are in informal employment while 1.3% have a university Degree and above.

“This will develop the skills of the workforce and improve quality of the life of workers and their prospects of work. The experience gained from work place based learning is highly valued by employers and studies point out that it is a good strategy to address skills mismatch and youth unemployment,” the Minister said.

She noted that the pace at which labor market dynamics are changing especially driven by technology, requires learning institutions and the industry to embrace innovative ways of skills training.

“No agency or ministry can assume monopoly of skills development because different agencies are responsible for different elements of skills for example employers and government to deliver specific training standards,” she said.

Mukwaya said that apprentices will be paid negotiable wages for their work but was quick to add that skills acquisition should be the ultimate goal rather than payment.

The Ministry of Education, other government bodies and players in the labor industry from private sector all referred to the proposed apprenticeship scheme as a step in the right direction.

“Work based learning is recognized as one of the determining success factors influence the  the school work transition for young people and upskilling of those working,” the Minister of Education remarked in a statement read by State Minister for Sports, James Bakabulindi.

Peter Werike, the Secretary General for National Organization of Trade Unions (NOTU) which brings together workers in Uganda said; “This is the right journey that we should take and all stakeholders must support it. We want youth to be employed but they can’t be employed without the skills. Chinese are coming here to drive tractors because out young people lack those skills.”

On her part, the Director for the International Labor Organization (ILO) for East Africa, Mary Kawar said that apprenticeship is critical in strengthening Uganda’s competitiveness for sustainable wealth creation, employment and inclusive growth.

She noted that unemployment remains a problem world over, resulting from skills mismatch between supply and demand, and the fact that young people are deprived of opportunities which traps them in low paying jobs.

According to Pius Bigirimana, the Permanent Secretary in the Ministry of Gender, Labor and Social Development, a final paper on the apprenticeship scheme will be presented to Cabinet by September this year. 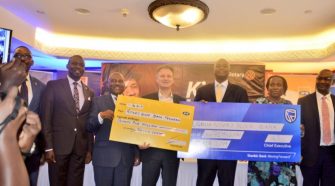