The Minister of Health, Dr Jane Ruth Acheng has revealed that the Ministry is yet to roll out a nationwide vaccination in the fight against the Cholera Outbreak in the country.

The Minister made the submission while responding to a matter of National importance raised by Busia Municipality MP, Geoffrey Macho who noted that a number of cases have been registered in the area calling upon government to take action and save the situation before it escalates.

Macho said; “Last week, Busia Municipality woke up on a sad note, a lady of 52 years was suffering from Cholera and as per now, we have 10 cases of cholera admitted at the health center four. Government should give us urgent attention”.

In response, the Minister of Health, Dr Aceng attributed the cholera outbreak to the heavy rains that have gone on for months adding however that the situation is under their control.

“As you are much aware, we have had heavy rains for the last so many months and because of these rains, we have Cholera outbreaks in many parts of the country,” Acheng said.

“We have also had Cholera outbreaks in the refugee camps, in Hoima, but we have been responding and the response has been good,” Acheng noted.

The Minister said that so far the outbreaks that we are currently having in Kampala has gone down and to date only 5 admitted in hospitals.

“The good news is that we have started bringing in the Cholera vaccines, we started with the refugee camps because the numbers we were getting there were quiet many”.

She observed that the Ministry will officially launch the Cholera vaccine in July in Nebbi for all the other districts in the country. 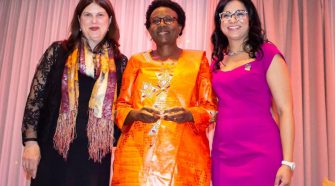