President Yoweri Museveni has said he has never been sick in 31 years.

“Have you ever heard that Museveni has fallen sick and my legs hanged in hospital, for the last 31 years?” President Museveni asked while speaking in Budaka district last week.

“This is because I observe some of these health tips [practices] which have eventually helped me to prevent some of these diseases.”

He said many of the diseases are preventable and that most people do not observe health tips.

“Most diseases that overwhelm these hospitals and health centres can be prevented if the people can improve on their hygiene and sanitation, because 75 per cent of cases registered are preventable,” he explained.

He listed among others, vaccination and immunization, sleeping under mosquito treated nets, avoidance of alcohol, good nutrition, hygiene and sanitation as ways of preventing diseases.

Apart from being physically fit, the president was recently described as smarter than the entire cabinet by Kampala Minister, Beti Kamya.

‘‘For the little time I have worked with the president, I find him, a very informed and tolerant leader. I sit in cabinet every Wednesday, but actually I think he is more intelligent than cabinet combined,” Kamya was recently quoted by NTV Uganda as saying.

BBC Africa says it has regularly reported on ailing presidents on its “Africa live page” and Museveni was never among them.

The world service cited Nigeria’s President Muhammadu Buhari, saying he has been receiving treatment for an undisclosed illness in London since early May – his second trip for medical reasons this year.

The presidents of Angola, Zimbabwe, Benin and Algeria have travelled overseas for health reasons in the past year.

Reuters reported in May that Angolan President Jose Eduardo dos Santos had returned from Spain, following confirmation the 74-year-old was in the European country for health checks.

In July, Robert Mugabe was rushed to Singapore for “routine medical check-up”.

Museveni Pays Tribute to Mkapa, Flags to Fly at Half – Mast for 3 days 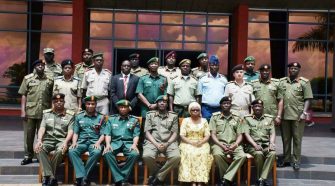