Ibanda Resident District Commissioner (RDC), Eliasto Akatuhebwa has slammed the O.C Prisons for using inmates to encroach on wetlands in the district.

He said this on Friday during a district stakeholders’ meeting organized by the Ministry of Water and Environment, and National Environment Management Authority (NEMA) in a bid to implement the Presidential directive of restoring the environment.

Akatuhebwa alleges that the Officers-in-charge (O.Cs) Prisons of Kiburara and Nyabuhikye both in Ibanda district have been using inmates’ labor to encroach on wetlands in the district.

“It is well known that Kiburara Prison has been destroying wetlands nearby river Mpanga bordering Kamwenge district and Nyabuhikye Prison tampering with Nyabukurungu wetland along Ibanda-Mbarara road. This must stop immediately,” said the RDC.

“We agreed that inmates should not do any work in a wetland. We can not as government try to protect the environment and at the same time be seen destroying the environment. Let the O.Cs comply” said Akatuhebwa.

He says those in Kiburara have been taking advantage since the wetland is located in Kiburara government Prisons.

The wetland covers a total of 28 acres along Ibanda-Kamwenge road near river banks of River Mpanga.

Akatuhebwa also warned politicians and technical officials against bringing in political interests when restoring wetlands in the district.

“When a certain MP calls, you ignore the call and go on cutting trees. Political interests can’t be avoided but we shall not keep on singing songs until the environment is no more then we start regretting. In Kiruhura, they have cut trees in wetlands, it is now us,” explained Akatuhebwa

The District Environment Officer, Tom Nuwagira confirmed to SoftPower News that as a district, they have been writing to the prisons’ officers but they have failed to comply.

“As a district, we raised the concern but we are really tired of writing to prisons officers who have kept a deaf ear to the matter” said Nuwagira.

In response, the O.C Kiburara Prison, SSP Festo Sambya accepted to get out from the wetlands appealing environment officer to work with prisons to fight wetland encroachment.

“We have no objection but I want you to say that the prison is on the boundary we are sharing the river. Kamwenge on the other side and Ibanda on another side. Let the environment officer come and we get the buffer zone,” Sambya commented.

The district leadership formed a task force to restore wetlands in the area.

It will start with Rushango Parish in Nyamarebe sub-county Ibanda North County where 31 people have encroached wetlands.

“I request that we immediately start with Rushango Parish in Nyamarebe sub-county in Ibanda North where 31 people have already encroached on the wetlands,” said the RDC. 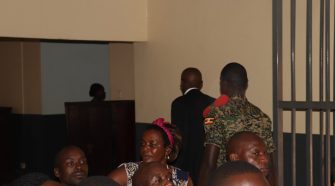