Hearing of the corruption case against suspended Minister for Labor, Herbert Kabafunzaki before the anti- corruption court has flopped this morning as one of his lawyers failed to show up in court.

Although one of Kabafunzaki’s lawyers, Oine Ronald appeared in court with two other defense counsels representing the co- accused, Oine asked Justice Margret Tibulya to adjourn the matter to the next convenient date.

Oine informed court that he had already written to the court registrar seeking for an adjournment date because his colleague Mac Dusman Kabega was in a meeting with the Principle Judge.

The judge accepted his request and adjourned the hearing of the case to Monday 14th August 2017.

Prosecution alleges that on 8th April at Serena Hotel Kampala, Mugabo participated with Hon Kabafunzaki in receiving UgShs 5 million as gratification from Muhammad Hammed for clearing his name of a sexual harassment case byone of his employees. 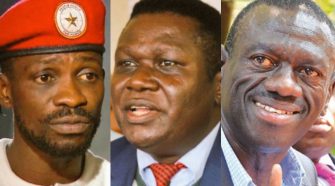