Rwanda’s President, Paul Kagame has said the Rwandan dissidents exiled in South Africa are responsible for the sour relations between Uganda and Rwanda, whose results they are bound to benefit from.

He accused these exiles of propagating certain narratives to Uganda against Rwanda which he said is an attempt to create a problem in Rwanda. He said they are soliciting for Uganda’s support.

“With DR Congo we have no problem. But between South Africa and ourselves, there are these matters that go around in the media. Let me say this. Some of the things that are said to be believed by Uganda about us, are coming from these individuals living in South Africa,” Kagame said.

“Even logically, you try to understand, these individuals in South Africa plotting all kinds of things against us are the ones giving information to Uganda in a way to solicit support from Uganda against us”.

Whether accurate or not, the Rwandan leader added, the information is designed to create that problem from which they (Rwandans in South Africa) benefit.

“If Uganda believes in some of these things, it is because they have made a choice to believe them. We have raised these matters with Uganda, that when they are given information, it is because those people want to buy Uganda’s support”.

Commenting particularly on the relations between Uganda and Rwanda, Kagame said it was very intriguing given the good foundation and historical ties from which both countries should be building a good relationship.

“It is very intriguing, to find that, even with that history and a good foundation we have something like this going on. And it goes on every day, even as we speak. It is hard to just put it in one word, or even a few words”.

He however said the existing friction is a matter that can be resolved and must be resolved, adding that “the alternative is not something that we should even be thinking about, or entertaining, that we can stand in the way of our own progress or the progress of all East Africans”.

Kagame says the two neighboring countries have done well regarding optics – so many pronunciations, statements, but that there is little effort to put this to action.

“We should make an effort to do those things, not just say them. It doesn’t hurt anyone to keep on trying. What hurts is keeping quiet. And of course things are not improving because of that. Because we’re not doing much. We have had discussions over this for two years, we can resolve them whether it is egos or just wishing that things should be bad,” Kagame said.

In comparison with Rwanda’s relations with Burundi, Kagame said the situation with Burundi is relatively simpler.

He said it is not true that Rwanda is Burundi’s only problem since those in charge of solving the Burundi problems have not found the problem to be external or Rwanda. He said if there are any problems coming from Rwanda, then they are not the main problem and those ones can also be solved separately.

At the start of the year, President Kagame accused two countries neighboring Rwanda of supporting armed insurgents whose intention is to destabilize his country.

He said that the two neighbors have tried to revive the danger posed by FDLR, RNC, and other negative forces.

The Democratic Forces for the Liberation of Rwanda (FDLR) is an armed rebel group active in the eastern Democratic Republic of the Congo while Rwanda National Congress (RNC) is a Rwandan opposition group in exile which was founded Gen Kayumba Nyamwasa, Dr. Theogene Rudasingwa, Gerald Gahima, and Patrick Karegeya.

“Our relationship with our African brothers is stronger today. But there are still challenges in our region. Some neighbors have tried to revive the danger posed by FDLR, RNC, and other negative forces,” he said.

This, he said, jeopardizes the otherwise good progress in East African integration, as well as regional security.

“For one neighbor, we expect it. However, we are surprised by another neighbor, where the evidence we have, and which they must also have, shows clear complicity, despite public denials,” Kagame said, hesitant to disclose which neighbors he was making reference to.

He said that the matter is being handled, and that “we continue talking with our neighbors in the spirit of African solidarity”.

The relations between Kampala and Kigali have recently been characterized by counter accusations between the two administrations. Kigali in a protest note to Kampala in December 2017, had accused Uganda of facilitating rebel elements tied to the diaspora based opposition group, RNC and arresting Rwanda nationals. This was preceded by Uganda’s arrest and deportation of Rwandan nationals following a number of murders in Uganda.

Museveni said they had discussed the need for close cooperation within security intelligences so they can get enough facts, a point that was emphasized by Kagame.

Last month, the Ugandan government deported two of MTN Uganda’s Senior Managers, both foreign nationals for allegedly engaging in activities that compromised Uganda’s national security. The deported staffers included Annie Tabura, a Rwandan national who was working as the General Manager for Sales and Distribution at MTN.

Rwanda’s Annie Tabura was accused of acting as a conduit and creating mobile money networks in refugee camps and other areas in Uganda in a bid to compromise national security.

“Security agencies in close coordination with immigration officials have been investigating two foreign nationals working with a leading mobile telecom company over their engagement in acts which compromise national security,” read a Police statement.

Police said the two were using their employment “as tools to achieve their ill motives”.

“They were privy to technology and information that an ordinary person wouldn’t. They used their offices to jeopardize our security, so their presence here was a security threat. We felt that if they remained here, it would cause us further compromise of security,” ACP Polly Namaye, the deputy Police spokesperson said at the time. 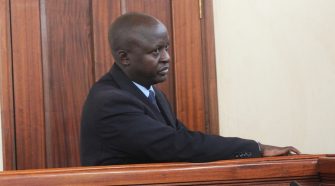