The Lord Mayor, Erias Lukwago has stopped the unveiling of a plaque at the Mayor’s parlour after the organizers ‘undermined’ his powers by inviting the Executive Director, Jennifer Musisi to preside over the function.

CCFU had selected four historical buildings that were to be marked as important with the aim of recognizing the efforts of institutions and families that have taken part in preservation of the said buildings.

The Mayor’s Parlour was among the buildings that we selected in the first phase, however, the organizers were shocked when they were stopped by the Lord Mayor’s staff led by the Personal Assistant, Elvis Nsonyi from carrying on with the activity.

Invited guests were left idle for over two hours as the organizers engaged the Lord Mayor’s staff to allow the event.

However, their plea fell on the deaf ears as Lukwago insisted on not allowing the event to happen. This went on until the Executive Director returned to the building from a half day interface with Members of Parliament.

On arrival, Musisi sent a team led by the Acting Deputy Executive Director, Sam Sserunkuuma, Director Physical Planning, Moses Atwine and the Spokesperson Peter Kawuju to hold negotiations with the Lord Mayor but all efforts failed.

After more than 30 minutes of engagement, the group chose to address the gathering but declined to unveil the commemorative plaque as the Lord Mayor had directed.

“We convey our apologies that we have kept you waiting and hungry for this long. There have been some diplomatic issues which we never addressed, please accept our apologies, this is not the way we operate at KCCA,” Sserunkuuma apologized.

“We are sorry the Executive Director has not been able to attend this function but we shall call you to the unveiling of the plaque if we address the diplomatic issues,” he added.

The Lord Mayor’s Personal Assistant, Nsonyi told Softpower News that the Lord Mayor’s actions were aimed at stopping the impunity and abuse of his office and powers.

“We all know that the main hall where the plaque was put is part of the Lord Mayor’s office. We were not informed about the event and we were surprised only to hear drums playing to a party that we didn’t know about,” Nsonyi said.

“We intervened and asked what was going on only to be told that there was unveiling of a plaque and on looking at the program, the Lord Mayor was not featuring anywhere. This was unacceptable impunity and could not be allowed since the Lord Mayor was meeting several mayors from Somalia,” Nsonyi added.

Nsonyi noted that the Lord Mayor allowed the organizers to have their lunch but barred them from holding the activity given the fact that the plaque that was to be unveiled read Mayor’s Parlour which is no longer the name since it now houses the Lord Mayor. 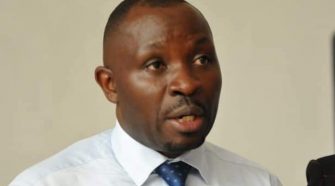