Makerere University staff have declared a strike which coincidentally comes as students report for the new semester.

The three Associations including academic staff, administrative staff and the National Union of Educational Institutions (NUEI) resolved to embark on industrial action in a meeting held Friday.

In a subsequent statement issued jointly by the three Associations, they indicate that the decision to withdraw their labour was made unanimously. The strike took effect at midnight on Saturday “until all our demands are met”.

However, the university hospital, security personnel and salaries staff will continue to work, according to the statement.

The aggrieved staff had outlined their grievances in a prior meeting held on January 11 at Makerere University. In that meeting, they condemned strongly what they termed as the irregular dismissal of their fellow lecturers.

The other demand was for Management to withdraw two members (Thomas Tayembwa and Bruce Balaba Kabasa) who were recently appointed to the University Council. They said the appointment of the duo to the Council flouted the rules.

Last week, the Vice Chancellor wrote to Dr Muhwezi suspending him with immediate effect for persistently engaging in acts of misconduct and incitement with the intent to cause disobedience and strikes.

Now, the staff have in their statement denounced “in the strongest terms possible the suspension of another Association leader (Dr Muhwezi)…. and the deployment of soldiers to deny him access to his home on the main campus and the unconscionable harassment of his family”.

They say they demand for the unconditional lifting of Muhwezi’s “arbitrary suspension” with immediate effect and the removal of the soldiers illegally deployed at his home.

Two other staffers who double as leaders in the Makerere Administrative Staff Association; Bennet Magara (Chairman) and Kalema Joseph (General Secretary) were among the over 30 staff that were dismissed by the University this month.

Among the demands made by the striking staff is; the reinstatement of the suspended leaders; Magara, Muhwezi and Kalema, allowing Ruth Iteu to represent MASA in the University Council and ending attacks on the autonomy of staff Associations and their leaders.

They have also demanded that the staff appeals tribunal is facilitated to hear staff appeals expeditiously and degazetting of the unconstitutional amendment of Human Resource Manual.

The striking staff say they have secured standby legal counsel from lawyer Isaac Ssemakadde to provide counsel to all the university staff affected or threatened by the continued “heavy handedness, intimidation, victimization and abuse of power” by the university Management under the Vice Chancellor. 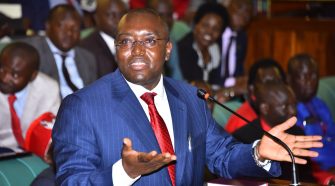