This follows her arrest on Thursday June 14 for questioning in connection with the murder of former Arua Municipality MP, Ibrahim Abiriga, before detaining her at Nagalama Police station.

According to SP Vincent Ssekate, the CID Police Spokesperson, Nambooze was taken to Kiruddu hospital from Naggalama, after complaining of not feeling well.

“It is our routine exercise to take any suspect who complains of any ill feeling to a medical facility for checkup. Hon. Nambooze complained that she was not feeling well and that is why we took her there,” SP Ssekate told SoftPower News on Saturday afternoon.

“It is not true that she was in critical condition”, Ssekate said.

The legislator was arrested from her home in Mukono on Wednesday June 13 and briefly detained at Jinja road police station before transferring her to Naggalama. She would later be released on the same day on police bond.

On Thursday June 14, the opposition Democratic Party lawmaker, was summoned to appear at SIU Kireka to make an additional statement. She was thereafter rearrested and taken to Naggalama Police Station where she has since been detained.

However, Kampala lord mayor and one of her lawyers Elias Lukwago, Saturday morning took to his social media accounts and said that Nambooze was “rushed to Kiruddu by police when in critical condition”.

Earlier, photos of her(Nambooze) allegedly lying on a bench in the office of the OC Naggalama Police Station, receiving treatment made rounds on social media, but when asked about them, Mr. Ssekate denied having knowledge about them.

“That one I don’t know about it and I have not seen any myself”, he said.

On Tuesday, Police said that Hon Nambooze and three other people who include Raymond Soulfa, alias Peng Peng, Nasser Mugerwa and a one Jane Kuli would be arrested for alleged offensive communication since they used their various social media platforms to support the murder of the West Nile legislator days before the killing was effected.

It remains unclear whether Hon Nambooze will released on police bond again given the pending president’s directive of not giving bail and bond to murder suspects.

President Yoweri Museveni told the nation while speaking after the reading of the FY 2018/2019 budget on Thursday 14, that the Judiciary and Police should stop granting bail and bond respectively to the suspected murderers.

“There are two things I am not going to accept anymore; police bonds and bail. I don’t want to hear about them again. Somebody suspected of killing our people, you give him/her police bond? No way! This is not acceptable,” Museveni said at Serena conference centre”, Mr Museveni said.

However, in a letter by the Chief Justice Bart Katureebe, on Friday, he reiterated that the judiciary was not bothered by the President’s statements and will follow the law as it is, in granting bail to all suspects.

Also read : “Courts Will Follow the Law on Matters of Bail” – Chief Justice Responds to Museveni 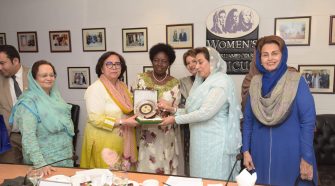