Senior Presidential Adviser for Special Operations, Muhoozi Kainerugaba has been decorated with his new rank of Lieutenant General a few weeks after he was elevated from his previous rank of Maj Gen.

Lt Gen Muhoozi was among the UPDF Officers who were promoted by the Commander-in-chief of the UPDF, President Yoweri Museveni on February 8.

Muhoozi was decorated by the Chief of Defence Forces, (CDF), Gen David Muhoozi.

The 44-year-old military officer who is son to President Yoweri Museveni was accompanied by his wife, Charlotte Kainerugaba and the two have three children. He has been an active soldier since 1999.

Prior to his current designation in the military, Muhoozi was the commander of the Special Forces, which is responsible for providing security to the President of Uganda.

He was later admitted to Egyptian Military Academy where he took both the company and battalion commanders courses.

Upon his return to Uganda from the Royal Military Academy Sandhurst in U.K in 2000, he was assigned to the Presidential Protection Unit as a second lieutenant.

In 2007 he was admitted to a one-year course at the United States Army Command and General Staff College at Fort Leavenworth, Kansas, graduating in June 2008. Following that, he successfully completed the Executive National Security Programme at the South African National Defence College. 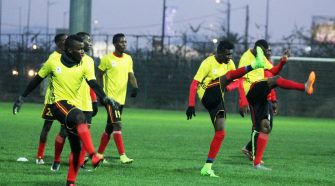