President Yoweri Kaguta Museveni will Monday December 31, deliver his New Year’s address to the nation at 7pm, an event which will be relayed live on all major radio and television stations.

In a similar address while ending 2017, the President outlined a number of challenges facing the country which included criminals that targeted women. More than 20 women were brutally murdered in areas of Wakiso and Entebbe.

The President said the murderers were then, taking advantage of a gap in security infrastructure in the form of absence of cameras in the towns and along the high-ways and also inadequate forensic equipment (tracing criminal through blood-samples, finger-prints etc.)

He also decried the bad fishing methods on lakes of Uganda which he said had destroyed the ancient industry yet it was happening on the watch of authorities.

He explained that this was the reason why he deployed UPDF officers in February 2017, to man the lakes, saying at least in the few months of their operation, the bad practices had reduced.

The President further assured Ugandans of their security revealing that, to send a signal to the terrorists, the UPDF then, had launched an air and artillery attack on ADF who were continuing to freely use Eastern Congo to train, recruit assassins in Uganda like the ones who killed a number of Sheikhs in 2016 saying that they got their punishment.

Other things highlighted by the President, included the little rains whose impact according to him wouldn’t have been felt if farmers had prioritised irrigation. He also called for a shift from subsistence to commercial farming.

He pledged to intensify support for the Ugandan scientists and groups that wanted to do maize-milling and artisan as well as attracting more FDIs (Foreign Direct Investments).

On health, he cited the fact that the non-communicable diseases like cancers, hypertension and heart diseases were killing Ugandans more than the communicable ones, saying government had taken deliberate measures to alter the pattern in Uganda.

The President also hinted on political integration of Africa in which he said is the only way that can guarantee the future of Africa.

On Monday, the President is likely to capture murder of high profile people by assassins allegedly traveling on motorbikes, progress in infrastructure development, health especially in regard to Ebola threats from the neighbouring DRC as well as security of Ugandans.

He may as well highlight on the achievements in sports especially the second back to back qualification of the Uganda Cranes for African Cup of Nations final tournament. 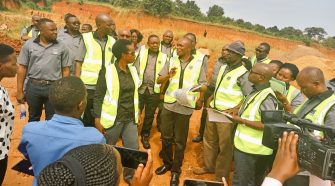