The newly appointed Deputy IGP of Police, Brig Sabiiti Muzeei has in his first interface with the media since his appointment rallied Ugandans to participate in the ongoing campaign to reduce the shortages in blood stocks through blood donation.

He personally made a donation of blood before asking Ugandans to follow suit.

“I encourage the public to join this effort to donate blood and save Ugandans that are in the most need; pregnant mothers, accident victims, patients and children,” he said.

He noted with concern that there’s no factory that manufactures blood in the whole world and appealed to the Ugandans with good will to join the noble cause.

The Deputy IGP said that blood is very important to everyone regardless of social class.

Regarding his new posting in the Police, Brig Muzeei said that he was ready to serve.

“In service wherever you go, you serve. So, I am ready for my new appointment,” Brig Muzeei said, hesitating to comment much.

Brig Muzeei together with the newly appointed Inspector General of Police, Okoth Ochola inherit a Police Force that is faced with high rates of crime, low public confidence and rogue officers considered to be in alliance with criminal elements. 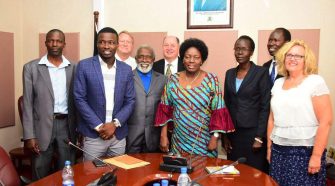