The trial of former LRA commander, Dominic Ongwen at the International Criminal Court (ICC) resumed on Tuesday with the defence side arguing that Ongwen was a victim of indoctrination.

Ongwen, 43, an ex-commander of the Siniya Brigade of the Lords Resistance Army (LRA) rebel group is facing 70 charges of war crimes, including murder, sexual slavery and recruiting child soldiers at the ICC.

But Ongwen’s lawyers say he was abducted by the LRA when he was 10 years old and argue he is not a criminal, but a victim.

The trial had taken a summer recess and resumed yesterday with the presentation of the opening statements of Dominic Ongwen’s defence team.

Led by Krispus Ayena Odongo, Ongwen’s lawyers said that the accused was abducted and indoctrinated by the rebel group.

Ayena told court that Ongwen “was indoctrinated into the LRA for 27 years” and so “he doesn’t have a mind of his own”.

“The Defence evidence will show that Dominic Ongwen was a victim rather than perpetrator,” he added in his opening statements.

The defence further submitted that the accused had little options at his disposal especially given that he was raised in a brutal environment. For this reason, Ongwen did things that he did not intend to do, Ayena told court.

Charles Taku and Beth Lyons, other Defence Counsels for Mr Ongwen, also took the floor to address modes of liability; matters dealing with fair trial in this case; and finally mental health of the accused and the “duress” the accused was under during his time LRA.

Ongwen is accused of committing among others attacks against the civilian population in Lukodi, Pajule, Odek and Abok IDP camps between October 2003 and June 2004.

More than 200,000 people have lost their lives in LRA attacks since the group was founded in 1987. Tens of thousands of others survived atrocities they say the group committed.

According to his testimony, Ongwen was abducted by the LRA as he walked to Koro Abili Primary School in 1988 when he was fourteen. However, it has often been reported that he was nine or ten, and also that he was carried by other captives all the way up to the LRA’s main military bases because he was ‘too little to walk’.

The trial will resume 1st October 2018 with the testimony of the first Defence witness.

Ongwen’s case has been described as unique since it is the first ICC case in which an inductee is being charged with the same crimes as those done to him.

Jan 2015 –  Ongwen surrenders himself to the Seleka rebels in CAR and is handed to U.S Special forces. 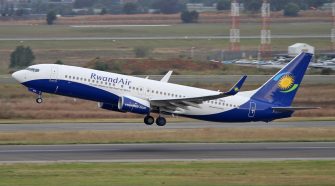 Rwanda Gets First Case of Coronavirus