Onyango who plies his trade in South Africa’s Mamelodi Sundowns, was the only player based in Africa on the selected Africa’s best XI team 2018. Others on the team include Mohamed Salah (African Player of the year 2018), Aurier, Benatia, Bailly, Koulibaly, Keita, Partey, Mahad Mahrez, Aubameyang and Sadio Mane

Onyango who is credited for guiding Cranes to the second back-to-back AFCON finals as well as maintaining a superb performance at Mamelodi, immediately took to social media and tweeted: “IF YOU BELIEVE, YOU CAN DO IT”.

In the same awards, Uganda Cranes lost to Mauritania on the CAF national team of the year.

“I congratulate my son @masindeonyango for being named in Africa’s best XI football team at the #CAFAwards18 in Dakar, Senegal. There’s no doubt his goal-keeping skills have contributed immensely to Uganda’s recent footballing success, and as a country, we are proud of him,” the President wrote on Twitter on Wednesday. 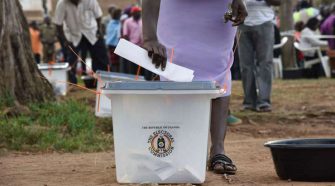