Parliament has expressed concern over the decision by UN to shift the United Nations Centre for Peace which coordinates several peacekeeping missions in Africa, from Uganda to the Kenyan capital, Nairobi.

The issue was raised on the floor of Parliament by Lwemiyaga MP, Theodore Ssekikubo who noted that the country is set to lose alot of benefits once the decision is effected.

However, the Finance Minister, Matia Kasaija told legislators that government is equally concerned about reports that UN intends to relocate its Entebbe base to Nairobi. Kasaija noted that President Museveni has intervened and consequently written to the New York City based UN Headquarters to reverse their impending move.

The President has already written to the UN expressing the credentials that Uganda possesses, Kasaija said, emphasizing that government is putting up a spirited fight to ensure that this centre remains in Uganda.

Kasaija told Parliament that “The Ministry of Foreign Affairs has put up a team that will traverse various capitals to lobby for the UN base to be maintained here”.

On May 01, 2018, UN Secretary General, Antonio Guterres wrote to the United Nations General Assembly committee to assess the 11 existing UN secretariats across the world, including the base at Entebbe, with the view of creating one-stop centres to streamline operations. Guterres recommended that the Entebbe base be shifted to Nairobi to save about $11.3 million (about Shs 42 billion).

However, the MP for Manyija County, John Baptist Nambeshe said that whereas there are other factors that UN raises for shifting base to Nairobi, the UN fallout with Foreign Affairs Sam Kutesa must not be ignored.

The Chairperson of the Committee on Foreign Affairs, Rose Masaaba Mutonyi (Bubulo West) said that she had been given assurance by the Ministry of Foreign Affairs that the matter is being handled.

MPs urged Speaker Rebecca Kadaga to summon Foreign Affairs Ministry to present a comprehensive statement on the floor of Parliament for debate.

However, Kadaga said that Kutesa is currently in Cairo with the President and the State Minister, Okello Oryem was not present in the House.

She ordered members to prepare a formal motion which shall be discussed extensively on the matter at hand.

When the issue regarding the shifting of the UN base first came up in March, government refuted the reports. The Ministry of Foreign Affairs at the time said there was no such arrangement and that Uganda was actively engaged in bidding to host the UN Centre permanently.

The Entebbe Centre which among other benefits employs over 260 Ugandan staffers serves UN Missions in; Central African Republic, Mali, Democratic Republic of Congo, Darfur (Sudan), Abyei (UNISFA), South Sudan, Somalia, the Office of the Special Envoy of the Secretary-General to the Great Lakes Region and Burundi.

Currently, it provides a range of administrative, logistics and information and communications technology services to thirteen client missions in Africa, representing over 73% of all United Nations peacekeeping and special political missions worldwide.

In 2016, a UN General Assembly decision mandated the UN Secretary General to develop a Global Service Delivery Model for the delivery of standardized administrative support services across the UN Secretariat, including Peacekeeping and other field- based entities.

Further assessment would be done on the three locations (Entebbe, Kuwait and Brindisi, Italy) from which shared services are provided for Peacekeeping and Special Political Missions. 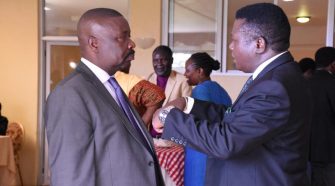 Conveners of National Dialogue Impressed with Progress in Cohesion