President Yoweri Kaguta Museveni has given his endorsement for Uganda to host the Global Peace Convention 2018, scheduled for August 2018.

The President gave the green light at a meeting held with former President of Zanzibar, Dr. Amani Abeid Karume and the Rt. Hon. Deputy Speaker of Parliament, Jacob Oulanyah. The meeting took place at the President’s Kisozi Ranch, and was attended by the Minister for Public Service, Hon. Muruli Mukasa and Mr. David Caprara, the Vice-President for Strategic Partnerships with the Global Peace Foundation.

“We shall look for whatever money we have to support you,” Museveni said, committing that Government would make an input in the Private Public Partnership (PPP) to ensure the success of the high level meet.

Deputy Speaker Oulanyah expressed his joy that the Convention, which had been in the planning for over four years, was finally coming to fruition.
“Now we can bring the whole world to Uganda and declare our commitment to peace,” he stated.
Oulanyah, who has been championing the Global Peace Convention, has been involved in several preparatory meetings including those in New York (2016) Belfast (2016) and Manila (2017).

Uganda had previously been fronted to host the Global Peace Convention in 2015 but owing to the country’s internal preparations for the 2016 general elections, the event was moved to Zanzibar.

President Museveni tasked Minister Muruli Mukasa to lead the efforts on the Government side by constituting the National Organising Committee (NOC) that will plan, prepare and execute the operations necessary to host a successful convention.

The 2018 Convention under the auspices of the Global Peace Foundation is expected be a strategic meeting of up to 1,000 delegates including former and current heads of state, policy makers, cultural and religious leaders including youth, women, academia, development partners, business entrepreneurs, media and regional policy bodies, coming together to build consensus towards regional challenges.

The Global Peace Foundation is an international non-sectarian, non-partisan, non-profit organization, which promotes an innovative, values-based approach to peace building, guided by the vision of “One family under God.” GPF engages and organizes a global network of public and private-sector partners who develop community, national, and regional peace building models as the foundation for ethical and cohesive societies. 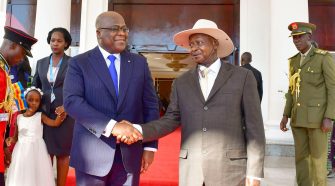