Rwandan celebrated model, dancer and actress Alexia Uwera Mupende has died after she was reportedly stabbed by a housemaid.

Mupende, 35, died on Tuesday evening at her father’s home in Nyarugunga Sector, Kicukiro District in Rwanda, according to Rwandan newspaper, ‘The New Times’.

News of the celebrity’s demise first emerged on social media with a message calling on members of the public to help arrest her alleged killer, a 23-year old house-maid who worked at their home. The suspect has been identified as Niyireba Antoine.

Mupende’s death would later be confirmed by Modeste Mbabazi, the spokesperson of Rwanda Investigation Bureau.

Mupende was the General Manager of Waka Fitness, an up market fitness club in Kimihurura, a City of Kigali suburb. Here, she supervised the customer service desk but was also involved in sales, marketing and events management.

The model was due to be wedded on February 16 to lover, Allan Rwamo Kweli.

She has represented Rwanda at numerous modelling and fashion shows on the continent and beyond.

In 2015, she represented Rwanda at the 3rd edition of the Africa Fashion Show Geneva (AFSG) in Switzerland, becoming the first Rwandan model to grace the runway of AFSG.

Her desire in her fashion career was to change the skewed narrative that Africa is about hunger, children starving, war and corruption.
She sought to share with the world about Africa using Africa’s talent and the fashion materials most of whose origin is in Africa.

She felt that Africa had a central place in the global modelling and fashion industry.

Her Twitter bio read; “Rwanda’s premier model… My prayer is to become Africa’s next top model.. so am gona work on my size and touche”.

In November of 2015, she together with three other budding Rwandan models; Jeanine Dusabe, Rachel Uwineza, and Umutoni Georgette, took part in the annual Kampala Fashion Week.

Mupende was also an actress and she travelled to Colombo, Sri Lanka in January 2016 and to India in February of the same year, as part of the cast of ‘Dear Children Sincerely’, a Mashirika Performing Arts and Media Company stage Production in collaboration with Stages Theatre Group from Sri Lanka. 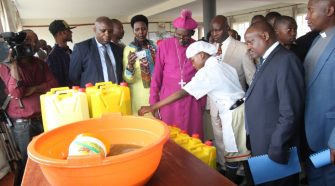