Two local artistes have called off their music concerts initially slated for this weekend, following the shocking death of one of their colleagues, singer, Mowzey Radio.

Moses Ssekibogo alias Radio died Thursday morning ten days after he was admitted in hospital where he has been treating brain injury. He was admitted at Case Hospital last week after he sustained injuries from a brawl at a bar.

Following the sad news, musicians Spice Diana and Fille both cancelled their concerts in honor of Radio.

Spice Diana announced on Thursday that she had postponed her concert which she had been aggressively promoting for months. The show was schedule to take place on Friday evening at Front Page in Namasuba with another one at Georgina Gardens the next day and a closing show at Lido Beach.

Diana eulogized Radio as a mentor, friend and source of inspiration.

“I recall the words you said to me ‘This year is your year Spice’. You promised to write for me 4 songs this year,” she said, recounting her memories of Radio.

“Am so sorry to announce that I and my Management are pulling out our concerts which were due this weekend and we will communicate a new date at a later stage after laying our brother to rest. Hope you can all understand,” she said.

Similarly, Fille Mutoni pushed her ‘Alter Ego’ concert to a later date which she said would be communicated. The songstress says postponing the event which was supposed to be at Golf Course Hotel on Friday was made “in respect for our fallen soldier [Radio]”.

“My concert was supposed to be tomorrow but we have decided to postpone it. Radio has contributed so much to this industry and to my career,” the ‘Got No Money’ singer said.

Earlier, Bebe Cool also called off his music shows that were line up for Adjumani and Arua districts this coming weekend. 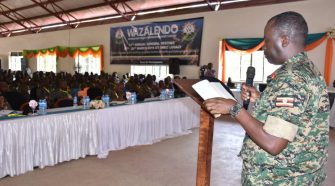