The Ministry of Health has refuted reports that have been making rounds in numerous media alleging that there was an Ebola case confirmed in Mubende district.

The State Minister of Health for General Duties, Dr Sarah Opendi told the press on Sunday that there has not been any reported case of Ebola in Uganda so far.

“We would like to inform the public that there is no Ebola outbreak in Mubende or any other part of the country,” the Minister said while speaking to the media at the Ministry of Health headquarters on Sunday.

The reports come at a time when authorities in neighbouring Democratic Republic of Congo (DRC) are racing to contain an outbreak of Ebola which broke out weeks ago. So far, 35 cases of Ebola have been confirmed in DRC and 10 people have already died of the virus.

Here in Uganda, the Ministry of Health says it has intensified efforts to prevent any possible spread of the Ebola epidemic to Uganda. Accordingly, screening of travelers at Entebbe International Airport has so far been stepped up.

“All travelers from DRC are being screened at the Health Desk at the airport for Ebola signs and symptoms. The screening targets all passengers who have had a history of travel of not less than 21 days to the DRC,” Minister Opendi said.

Still at the airport, a private medical centre has been equipped to provide counselling and clinical screening of all suspects. A standby ambulance with driver and relevant protective gear has also been provided by the Civil Aviation Authority (CAA) and is available twenty-four-seven.

According to the Minister, all leaders in the districts of Kampala, Wakiso, Kisoro, Kanungu, Kasese, Bundibugyo, Hoima, Bulisa, Nebbi, Arua, Maracha, Koboko, Kibaale, Kabaale, Mubende, Luwero and Nakaseke have been instructed to reactivate the District Task Forces in preparations for any possible outbreak.

Opendi said the taskforces are assigned to conduct a rapid risk assessment on importation of Ebola Virus Disease (EVD) cases through their districts, review and update district EVD preparedness and response plans.

They are also expected to ensure adequate community information and heightened surveillance by front line health workers in all health facilities.

An isolation facility has been set up at Mubende Regional Referral Hospital to attend to any suspected cases.The hospitalstaff have all been oriented on handling suspected VHF patients including Infection control and supportive care.

Relatedly, Opendi said that a case of Crimean-Congo Haemorrhagic Fever has been registered in Mubende. One person, a 35-year-old male from Kakumiro district presented with a high fever and vomiting and was admitted and died at Mubende regional referral hospital.

The attendants of the diseased who included his expectant wife and 4 others have since been quarantined and they are closely being monitored.

A National Rapid Response Team jointly from Ministry of Health and World Health Organization has been dispatched to Mubende with clear terms of reference to collect more information and assist the district to mount anappropriate response. 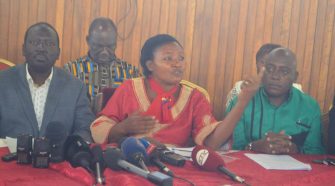