Vipers SC have Tuesday managed a convincing 3-0 win over Onduparaka FC in the StarTimes Uganda Premier league in the game played at St Mary’s stadium, Kitende.

The West Nilers looked a better side in the first stanza of the game when they dominated possession, but their efforts were barren up to the end of the first half.

Vipers seemed to have focused and reviewed their weaknesses in the first stanza. They returned with a different game plan for the second half as they pulled back possession with several attempts on goal.

Geoffrey Wasswa opened the deadlock when his spectacular chip in the 47th minute went past Onduparaka’s shotstopper before Dan Sserunkuma tapped the second seven minutes later.

Livingstone Mulondo’s 73rd goal was enough to end the game in favour of the defending champions, who now jump to 29 points from 13 matches played so far, with two games at hand and remain second on the log.

Onduparaka remain in the third position with 24 points pending a game between Mbarara City and Kirinnya Jinja SS tomorrow.

On Saturday, Vipers will play against CS Sfaxien of Tunisia in the CAF Confederation Cup Playoffs.

Meanwhile, Timothy Awany’s only goal in the 56th minute was enough to end the unbeaten run of URA FC in the other game played at Mandela National Stadium.

Police FC’s game against SC Villa ended in a two all draw. 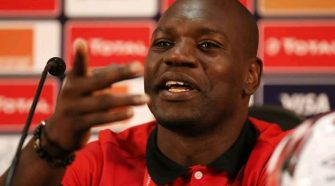 AFCON: Zimbabwe Should Not Be Underrated – Denis Onyango